I make order ; since I know myself I keep making order in different fields. Order is the master of order ! We find our way, we can add, take off, transmute, make changes with full consciousness !

Once again, things get in touch by themselves. You certainly noticed that the maxim goes beyond the other one « Do to others what you would like others would do to you ». The thought is linked. In fact, every action has its roots in the thought. You have here a timely example.

Bobbins for my sewing machine, Singer. I have had different sewing machines and I have used all kind of bobbins for all of them. The last one collapsed, the thread tension from below couldn’t follow anymore. I was explained that using non original bobbins could deteriorate, in the end, a sewing machine. Having now a Singer machine, it is the opportunity to do everything right. I make an order to the only Singer representative in Switzerland, some forty pieces. I wind up the most common threads.

La Boutique Coupons de Saint Pierre, Paris. First of all I look for my first supplier. He doesn’t work here anymore. That is all what I am told. I try in different local stores without success : well, I am looking for 200 bobbins. Finally, a saleswoman from a French store that doesn’t sell anymore Singer items tells me to try the Boutique Coupons de Saint Pierre. I come across Chrystelle, a saleswoman who asks me the right questions and ensures me that I can order the quantity I desire. In a few days, between Christmas and some days after the New Year my problem was solved. When I thanked Chrystelle, she told me she had just done her work. But I can make the difference between an employee who makes just what is needed to be done and the one who likes his job and does it thoroughly. The store is lucky to have her and I am lucky to meet her.

For my 600 threads, the 200 bobbins should be enough. What could I do with those I don’t need anymore ? I have a friend who is passionate by sewing machines. He has at least ten ! Old ones, older ones and very old ones. I tell him about my bobbins, send him some pictures and he looks forward receiving them. With my 200 bobbins I have just enough. I’ll have to buy a few in order to have a reserve.

I prepare the bobbins for my friend. Here is where the famous sentence you see next comes in. I could have put all the bobbins in a package, send it and that would have been all. But they were 200 of them from at least found different shapes. Among the metal ones, some had holes of different diameters and some had no holes on the other side. So, it seemed more reasonable to me take time to sort them and make specific packaging for each sort. Some of these bobbins, I had bought, some others I had inherited in different ways. THe former users had sometimes winded up different colours in one bobbin. I couldn’t imagine my friend sewing and suddenly be stopped because there was no more thread and see in the bobbin another colour. So, I decided to have courage and emptied the most suspicious ones.

Here we see the result : each model is in a different bag and inside each of them there is a smaller bag bobbins of the same sort but with thread. In total there are some hundred.

As for those in plastic. I proceeded diferently and put a nice pink rubban. There too are some hundred. Once I had thought I had bought « Singer » bobbins for my « Singer » machine. It is only recently that I learnt that there are low and high bobbins and even if it is written « Singer » on one side, they are not the right ones foe me. I need the high ones which are marked on both sides. That is the way you learn things ! I also put a bag with some that had a pretty good quantity of thread.

Threads and colours… not always easy. We all know, if we are going to do a seam that requires a lot of thread, we better foresee the necessary quantity because from one colour bath to another, there are differences. But sometimes we can be pleasantly surprised : we pull a bit of thread from the spool, put it on the fabric and there is not much difference. However some of my threats remained single. So I tied them with two laces and will send them to my friend. The laces are nice and my friend will be able to use them on a future cap or on a vest.

Conclusion : I put myself in my friend’s shoes and if I had received such a quantity of bobbins, even as a present, I would like them sorted out and well wrapped. This maxim applies to everything, every situation. It is not always easy to implement it, but it brings a lot of satisfactions. That is why we should keep in mind :

I tell myself also that the matter that surrounds and makes us is the one that was at the beginning of the creation of the World, even though it is better to speak of information, and that it is my duty to greet and treat it with respect. 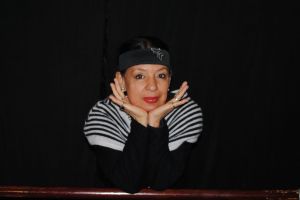